When Jean Michel Jarre wanted to toss his old ideas about making music out the window and try something radically new, he enlisted the help of French music producer Joachim Garraud early in 1999 to record what would become Metamorphoses (2000), Jarre’s first vocal album. This was the first time Jarre had hired a producer to collaborate on an album.

This interview, which was first published in 2000, also reflects that Garraud was heavily involved in Jarre’s Millennium concert in Egypt on December 31 / January 1, 2000. Garraud (whose middle name is André, same as Jarre) has in the years since this interview was made also become an international DJ and artist in his own name.

Question: Tell us about your company, Square Productions.

Joachim Garraud: Square Prod is my own production company, where we create jingles, videos, music, remix work and advertising for the music and TV industry. I am the artistic producer and ProTools specialist since 1992. I also remix and compose music, and is in charge of the development of the musical departement. 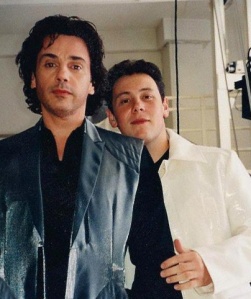 Question: How did you meet Jean Michel Jarre?

Joachim Garraud: I met Jean Michel when he hired my company to do the mastering and mixing for his compilation album Odyssey Through O2 in 1998. A meeting was set up by a mutual friend, the DJ Claude Monet. What we did was mixing the tracks and sequenced the audio to create a flowing sound design. This was the first time Jarre had seen ProTools in work, and discovered the efficiency of it, in our digital Apple environment. Then I worked on the sound design for his Paris concert in 1998, and later suggested to work with him as producer for a new album with a very different concept. So in 1999 we worked on a new studio album.

Question: What was your role in the recording of Metamorphoses?

Joachim Garraud: I suggested to Jean Michel to create a new sound concept based on something more sensitive, and drawing from modern rythms. For this ProTools was perfect, and I talked Jean Michel into recording the album completely digitally for the first time, from the beginning to the end. The concept is really simple; innovative sound design around human, natural, organic [arrangements]. Something clean and large with the new 24 bits system, with extraordinary space and a dynamic signal, plus some exotic oriental grooves.

Question: Which equipment was involved in the making of Metamorphoses?

Joachim Garraud: In terms of software, we used Logic Audio but mostly ProTools for everything; sound design, plug-ins, sound research, editing, mixing, remixing. In terms of hardware we used Roland JP-8080, Roland XP-80, Quasimidi Raven, Nordlead 2, Roland MC505, and the Digisequencer. We used both my studio at Square, and the [private] Croissy studio of Jean Michel.

Question: How did you choose singers for the album?

Joachim Garraud: We tossed a few names around, and discussed with Jean Michel of using this or that singer, all females. We also decided on using Jean Michel’s own voice but since he is not a singer, his voice is good for spoken words, so for artistic singing we used vocoders and many plug-ins for [processing the voice of Jean Michel]. I think it is very cool like that, to use a combination of [electronic] energy and the human voice. In fact, I used Jean Michel’s voice like another instrument, [as I shaped and transformed his voice].

Question: Did you meet any problems in integrating voices into the music?

Joachim Garraud: No, there were no problems as such. The recording of singing and voices was cool, and we allowed ourselves to take alot of time to do exactly what we had in mind. For the vocoder process I used so many plug-ins and chains and different mixes, so I can’t go into details because we did it so much and it depends on each song how we processed the voices [different all the time].

Question: Were any songs recorded for Metamorphoses that didn’t end up on the album?

Joachim Garraud: Yes, we recorded and finished four songs that were not chosen for the album. Two of these songs are planned for being used on the website, but I am not sure. I can’t talk so much about these songs, but Lonely Beat and Crazy Saturday are two of my favourites but still we can’t add them to the album because they are so different. Lonely Beat is a trip-hop song and Crazy Saturday is really aggressive, but has a great sound.

Question: What was the idea behind using a weather report on Tout est Bleu?

Joachim Garraud: That was the concept of the song. The first idea was to produce a song about communication, speed, distance, and recreating the feeling you should have when flying across the clouds. So I sampled mobile phone interference, added modem noise and foreigners speaking from a satellite in the sky… and then Jean Michel had the idea that this voice should be something that would interest everyone, from a common point. That’s why the main vocal part is an actual weather girl.

Question: Do you think the fans will be surprised by the new Jarre on Metamorphoses?

Joachim Garraud: I think the fans will be less shocked this time than before, when Jean Michel went directly into the techno wave. This time there is still the strong and emotional JMJ melodies, plus all the arrangements and sound design [that are typical JMJ standards]. The new style of percussions can perhaps help this record to reach a new audience. But there is something sure, and that is the fact that this is a vocal album, which will make it more accessible for TV and radio, as there are not so many areas for instrumental music in the broadcasting networks.

Question: Did you produce any remixes from the album?

Joachim Garraud: Yes, Hey Gagarin exists in three versions but actually only one was used on the album. Jean Michel wanted to have a new version of his original recording, that was more happy and less sad, corresponding with the optimistic feeling of the new millennium. The official remixes were done only for the single C’est la Vie where I made remixes for clubs and other media. Futureshock and Funkstorung and Hybrid also made some versions too. (Editor’s note: After the interview remixes were made for Tout est Bleu as well.)

I have also remixed many of Jean Michel’s old songs which will be played at the concert for the end of the year. I took the old tracks and updated them rythmically and in agreement with the style of the new album, because once on stage in Egypt, old and new songs will be played together and it is necessary with some coherence. So I integrated the old tracks with ProTools.

Question: What was your experience with working with Jean Michel Jarre?

Joachim Garraud: I am very proud to be the first external producer Jean Michel has hired. Working with him has been the best professional experience in my life. And in terms of human relations, Jean Michel has become a very good friend of mine. During 10 months of recording I was living in his Croissy home night and day.

Question: Your final words to the Jarre fans?

Joachim Garraud: I really hope that when you listen to the album you will get the same emotions that I had when producing the songs. I hope that I at the end of the day has respected Jean Michel’s sensitivity and been lucky in trying to modernize his music, without being unfaithful.